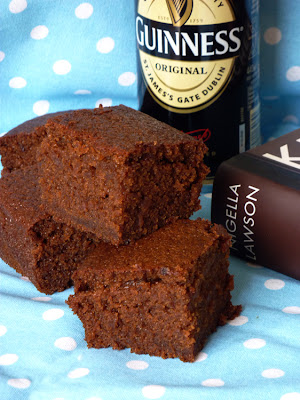 Quote from book -  I adore the deceptive plainness of gingerbread.  It is a definitively unfancy, and yet the flavour is so rich, and its deep-toned tang so subtle.  Here the tang is a little more emphatic as sour cream and liquorice-evocative stout give heady lift, but still this is - for all the treacly sugar and pungent spices - gentle and cosy-making though almost alarmingly addictive - Nigella Lawson Kitchen.
Faff Factor = 8
Bake = 7
Keeping Up Appearances = 8
Total score = 23/30
Blimey, talk about waffle on about a cake which is basically a ginger traybake.  Only joking Nigella, I am just a little envious of your ability with words to make your food sound so tantalisingly delicious you would want to bake something from your books everyday.
This is the second time I've tried to bake this cake.  My first attempt was such a disaster in both looks and taste it has taken me over a year to give it another try.  The method for this cake is pretty simple where you heat up the butter, syrup, sugar, Guinness and spices then whisk in the dried ingredients followed by sour cream and eggs.
At least this time the cake did not sink in the middle but I did need to add on a little more cooking time than stated to get the cake fully cooked.  Or so I thought, sadly the middle of the middle was still a little undercooked for my liking but I could not leave it in the oven any longer as the edges were starting to get over cooked.  After cutting I had to discard the 2 middle squares but that is a little sacrifice you have to pay I suppose.
Personally I didn't like the taste of this cake, it was too sour for me and I think it had a little bit too much Guinness and not enough ginger.  Others who I palmed this cake onto didn't think so and said how good it was which in all fairness it was it was just not sweet enough for me.  I did think it would make a lovely cake to have with custard though.
I've decided not use this recipe again and will be trying another ginger cake one later in the year to get a comparison, because as you know I like to compare. :-)
I've also realised that I am a little behind with my challenge.  At the end of June I should of been at 26 weeks and here it is nearing end of July and I'm only at that point so to my reckoning I'm about 4 weeks behind. Looks like I'll have to double up over the summer holidays considering I have a little more time and may try some more pastry recipes.  I'm thinking fruit tartlets at the moment so I better get some books out to decide the recipe to use.
Off to have a read.
Toodle Pip
Lynetta Xx

Email ThisBlogThis!Share to TwitterShare to FacebookShare to Pinterest
Labels: Eat Your Heart Out Mary

Lynetta
From leading a wild and exciting youth to being a happy mum and homemaker my life is now where I want it to be.

loved her last book so giving this one a go

My Favourite Places to visit with a cuppa